Where are T shirts and cotton garments manufactured?

Lots of people simply will not give a fig.

Why does it matter where your stuff comes from as long is its what you want at a price you are happy to pay?

What does it matter if it was made in Honduras, Bangladesh, Turkey,Pakistan, Nicargua, Dominican republic or the UK……yes, I did say UK.

It is no accident that garment production generally occurs in the most economically deprived regions of the world.

It is no accident because the pervading commercial imperative is to constantly reduce operatingcosts, to improve profitability, to satisfy the shareholders who want their dividends each year.

It is no accident because our expectation as consumers is that everything we want should cost as little as possible and we want it immediately or we are going to spit our dummies out.

Provenance can be a big contributory factor in the price you pay.

Expoitation occurs most easily in poorer economies where the population have few choices or representation.

Your choices as a consumer provide that representation.

If you continue to buy cheap clothing form a retailer that has a murky supply chain, you are almost certainly perpetuating the exploitation of workers somewhere.

Here is a rundown on where your stuff comes from with some of the brands that are aiming to be transparent.

A Canadian company that has production in Honduras,Nicaragua, Dominican republic for the US market and Bangladesh for the European market.

Gildan has had some problems with workers rights receiving bad press about one of the Hatian factories which has a contract to supply Gildan.

This seems to be a hiccup and not entirely representational of Gildans current efforts to be a socially responsible entity.

They were the first garment manufacturer to receive the Oeko-tex standard accreditation, which regulates safety standards in the textile industry.

Their production facilities are also audited and adhere to the Worldwide Responsible Accredited Production standards and Fair Labour Association.

Awards by the Canadian magazine Maclean’s place Gildan in the top 50 companies described as the best corporate citizens. Workers have access to free dental and medical care.

Gildan’s philanthropy has also been reported in its own press releases with several hundred thousand pounds of charitable donations made to youth programs since 2011.

Fruit of the Loom 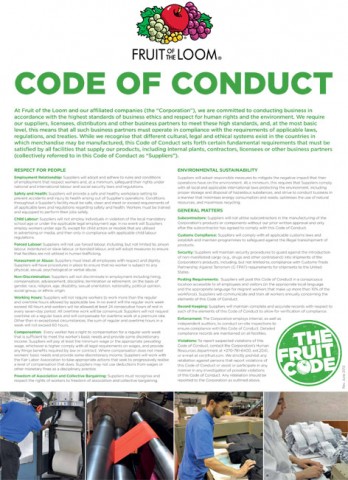 FOTL services its European market from a new production facility in Morocco.

This geographic proximity to the southern belly of Europe reduces shipping charges but the facility remains crucially outside of the richer EU economies where labour remains cheaper.

Now owned by Warren Buffett, a prolific philanthropist, the organisation had some bad press in 2001 regarding the discrimination against union workers and then some factory closures of union affiliated sites. Restructuring programs and highly visible efforts since then to improve the corporations CSR position demonstrate that FOTL are now a credible and ethical business.

Described as a vertically integrated operation, this simply means that the lengthy supply and process chain is singularly controlled by FOTL rather than fragmented and linked using third party operators or contractors.

This reduces operating costs and lead times, which provide a cost benefit to FOTL, which they pass to the customer by way of competitive pricing.

Facilities are WRAP audited and the garments are Oeko-tex accredited. Workers have access to free dental and medical care.

This brand is only 5 years old.

The significant difference between SS and the previous two brands is the FAIR WEAR accreditation.

From its inception, it has always been about sustainability, organic and fair working practices.

These factories are independent and are contracted suppliers, unlike the vertically integrated Gildan and FOTL brands

It would be difficult to find a more highly accredited brand in the printables/embroiderable market and Stanley Stella are one of the very brands that has manufacturing still inside the EU with all the stringent regulations that are enforced here.

This adherence to the highest values and EU/Turkey provenance adds costs and an inevitable higher price for the consumer. 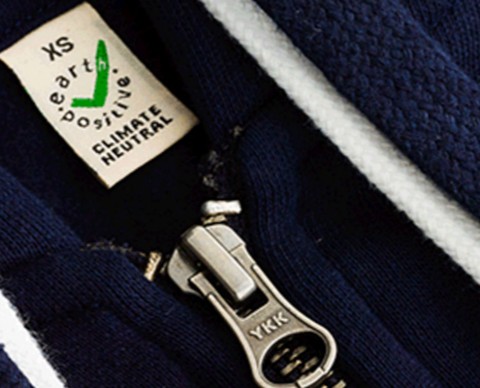 CC are a UK company with possibly the widest offering of ethically accredited garments under three distinct brands.

The umbrella brand is Continental Clothing with a sub brand called Earth positive. All garments are FAIR WEAR but the Earth Positive products are also organic and carbon neutral while the Salvage products are made from 100% recycled fibres from cotton and polyester.

Manufacturing occurs in India and Bangladesh for ‘off the shelf’ products and Turkey for bespoke products and the core products from the CC brand. China has a factory specialising in the production of the Salvage range. These are third party factories contracted as suppliers. 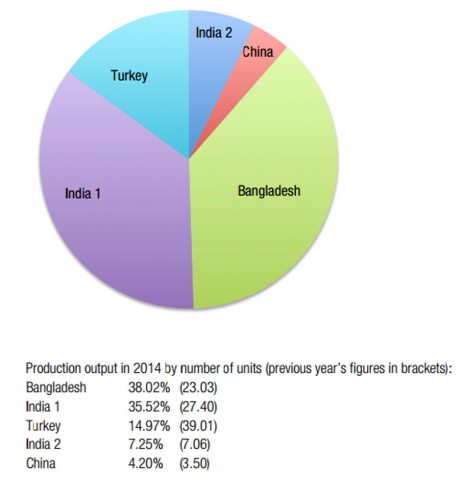 CC are at the forefront of innovation and can boast some high profile organisations as users of their products such as Oxfam and Greenpeace.

Shirtworks is the t shirt printing company of choice for many of these organisations with its Soil Association accreditation and Living Wage accreditation going back over 4 yrs.

Of all the brands that Shirtworks can supply, CC seem to offer the most transparency in a way that is accessible to the public.

What about UK manufacturing?

It is still possible to buy a cotton product that has been entirely conceived and manufactured in the UK but the printable’s and embroiderable clothing market is not serviced with a ‘ready to go’ product.

Britain is still renowned for its woollen clothing and still exports to Japan and the USA primarily with these products.

If you were ambitious and wanted to create your own UK clothing brand , you could devise your own supply chain from hundreds ofyarn providers all the way through to hundreds of finishers you can find in the UK. You would end up, however, with a product that could not compete on price with an offshore product unless it had a significant style differentiator or brand appeal.

UK manufacturing does not automatically signal ‘quality’ any more. Particularly with clothing.

The current demand for ‘cheap’ fast turnaround fashion means that it is not uncommon for ‘blanks’ to be manufactured offshore but the print finishing or embroidery is carried out in the UK.

This means that big fashion retailers do not need to commit to prints or decorations on long lead times and high volumes if they expect shifts in demand or want to reduce risk with large volumes of decorated stock.

At the moment, garment production exists in parts of the world where labour is cheap and where cotton, in the main, is already harvested or where it can be shipped to easily.

The future of cotton growth and the garment manufacturing has to build around sustainability.

Cotton production requires large areas of land and huge amounts of water and fertiliser and pesticides. It has the potential to cause significant environmental problems if managed incorrectly as was seen in the Aral sea region between 1989 and 2003. It was once the fourth largest lake on earth sustaining a vibrant economy, with many people relying on fishing and agriculture for their livelihoods, the Aral Sea has shrunk by three-quarters over the past few decades due to the mismanagement by the Soviet government of the time of cotton production.

Unless sustainability becomes a central theme, there is a danger that changing environmental conditions and mismanagement will cause massive environmental and social dangers.

Sustainability could mean altering our dependence on cotton and looking at alternative fibres. 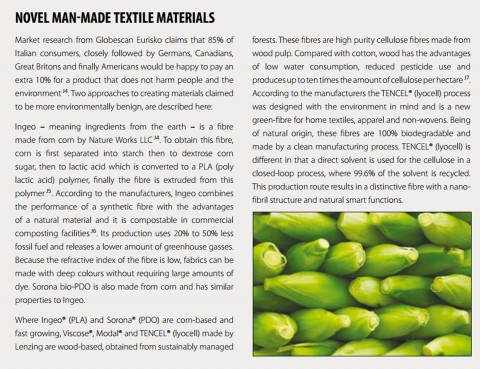 If this can become a reality then production or raw materials would need to shift dramatically to regions which can support such an endeavour. Ingeo would require very fertile areas that can sustain woodland.

Hemp has also been championed as an alternative to cotton with an environmental footprint 50% less than cotton.

Legislation in the US currently prohibits the growth of hemp, based on an outdated and illogical connection that hemp has to marijuana and the aggressive lobbyists within the cotton industry.

The heavily automated, genetically modified and subsidised cotton growing industry in the US is the largest in the world but processing and manufacturing still occurs in neighbouring developing countries like Mexico or Caribbean.

Perhaps the growth of raw materials, which require heavy industry and technological advantages, will shift more to 1st world nations while the labour required to complete the manufacturing will remain in the labour cheap regions.

Shirtworks is already supplying Tencel and modal fibre garments as well as organic cotton if you are looking for an environmentally sound alternative to regular cotton.

As always, your Shirtworks sales advisor can provide you with further advice.

We think that the future is not cotton.