The journey of the T shirt through popular culture

Last century, in 1990 I saw a film.
I was 18 yrs of age, still impressionable, still trying to figure out who I was and what my outward identity would communicate.
An image in that film caught my eye.
It was a v neck t shirt.
Not just any v neck T shirt, it was a garment draped over the languidly cool frame of the actor Matt Dillon who was playing the lead character, James Fogle, in Gus Van Sants film about a drug addict turned robber to fund his drug habit.
A poor choice for me as a life and fashion role model but I was 18 and I was a young fool who, all of a sudden, wanted a plain white v neck t shirt. An impossible thing to buy on the high street in the UK in 1990.This unattainability made it all the more desirable to me.

it turned out that this image had not just infected me but some of my contemporaries. I mused at the time that they must also have seen what I had seen and even though I did not know these people we shared the same type of radar for visual stimuli. We had picked up the same blip on our radar screen, we had become culturally infected  by the cinematic media of the time.

It turns out that this ‘blip’ is everywhere in cinema. It turns out that the blip is decades old and largely unchanged since 1898 when T shirts were issued to sailors during the Spanish American war. There have been subtle changes in construction and tailoring but if you took a plain white T shirt off the sweaty torso of a Sailor in 1944, pulled it over your head and walked down your local high street with a cocky strut, no one would point at you and laugh at your  61 year old antique get up of pensioners clothes. 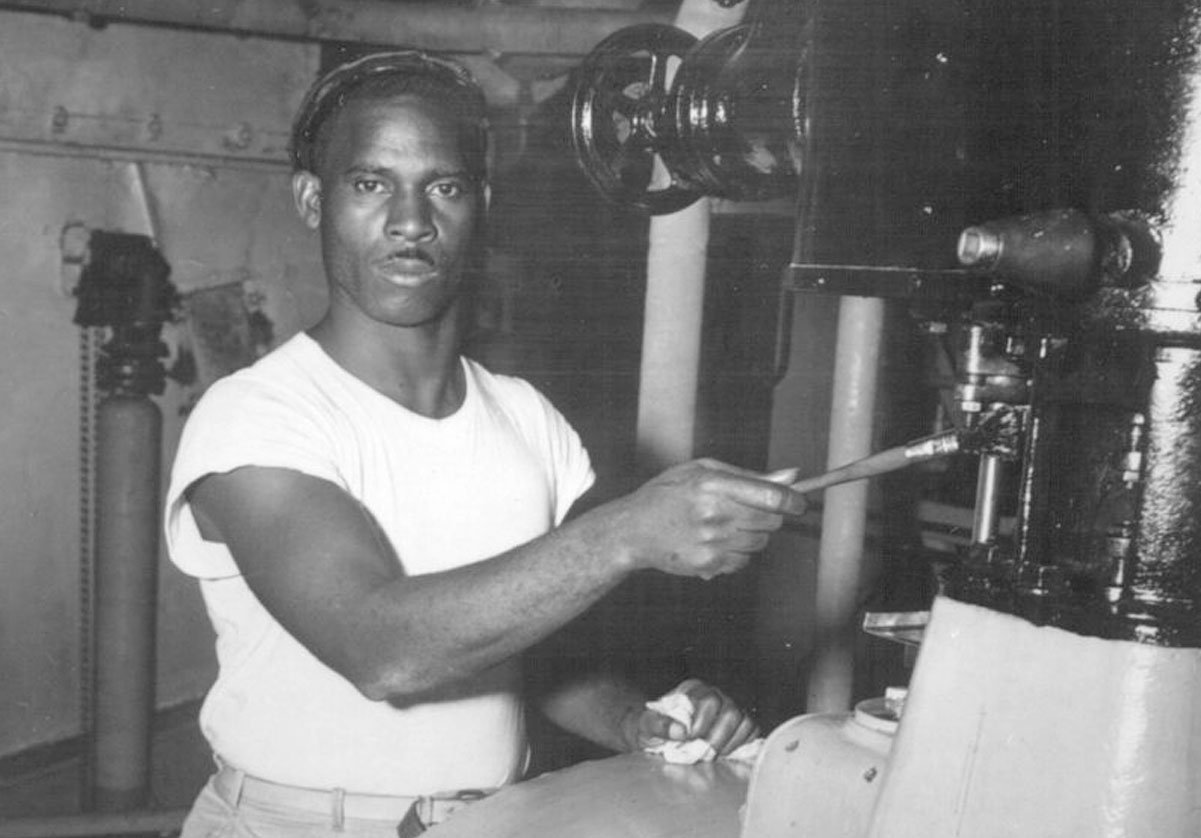 What has mostly changed, as our culture shifts through different attitudes, are the printed messages and artwork.
The earliest printed T shirts found on celluloid are in the 1939 film The Wizard of Oz. The scarecrow gets his wash and brush up from a small cohort, wearing green t shirts emblazoned with the words OZ. The idea of ‘OZ’ as a colourful escape for Dorothy (the lead female character)from the grey ‘post depression’ Kanas of middle America is still a powerful one for those escaping some ‘grey’ in their own lives. The message of transformation, inner strength and female empowerment is a message embodied in this film and embraced many years after by the gay community.
The letters ‘OZ’ mean nothing by themselves yet carry the weight of these ideas and unless you possess that ‘gaydar’ maybe it won’t show as that ‘blip’ for you. 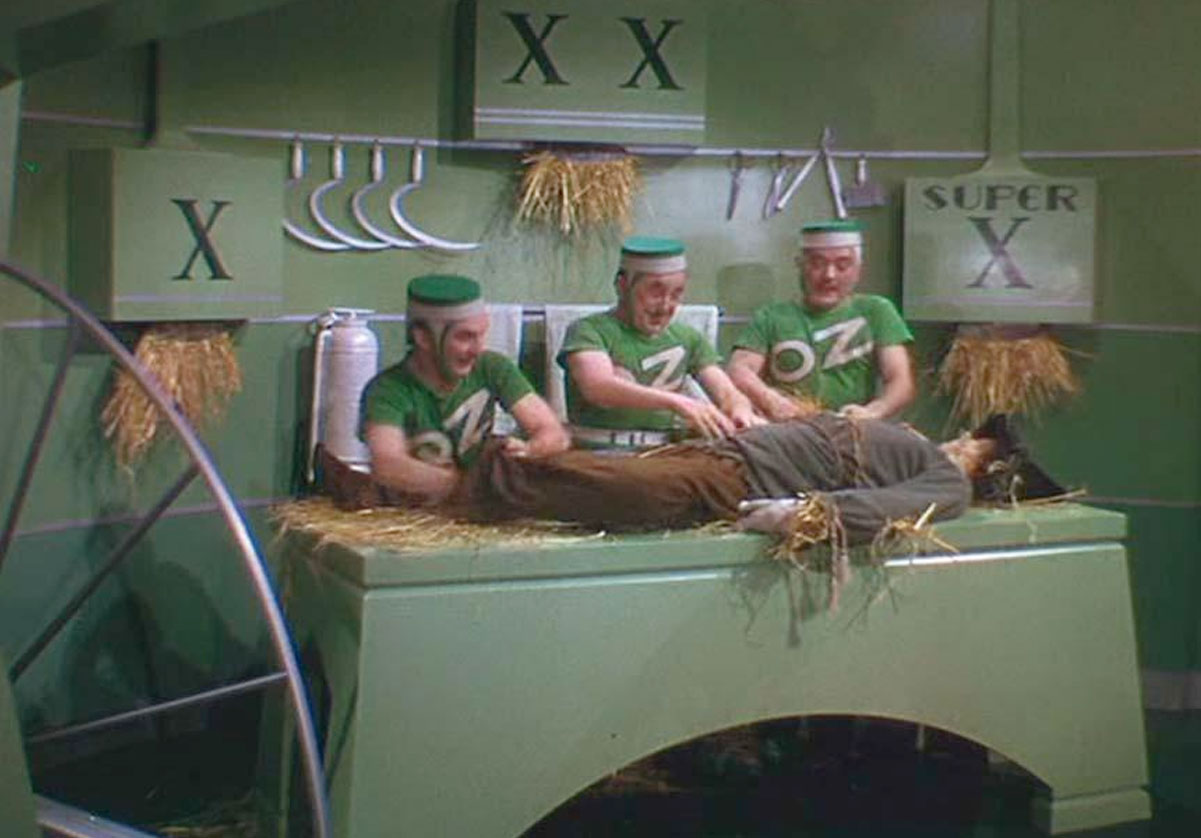 Don’t worry, the ‘gays’ are not having all the fun. Lazslo Benedek immortalised the ringer t shirt in his 1953 film ‘the wild one’ starring Marlon Brando and LeeMarvin. 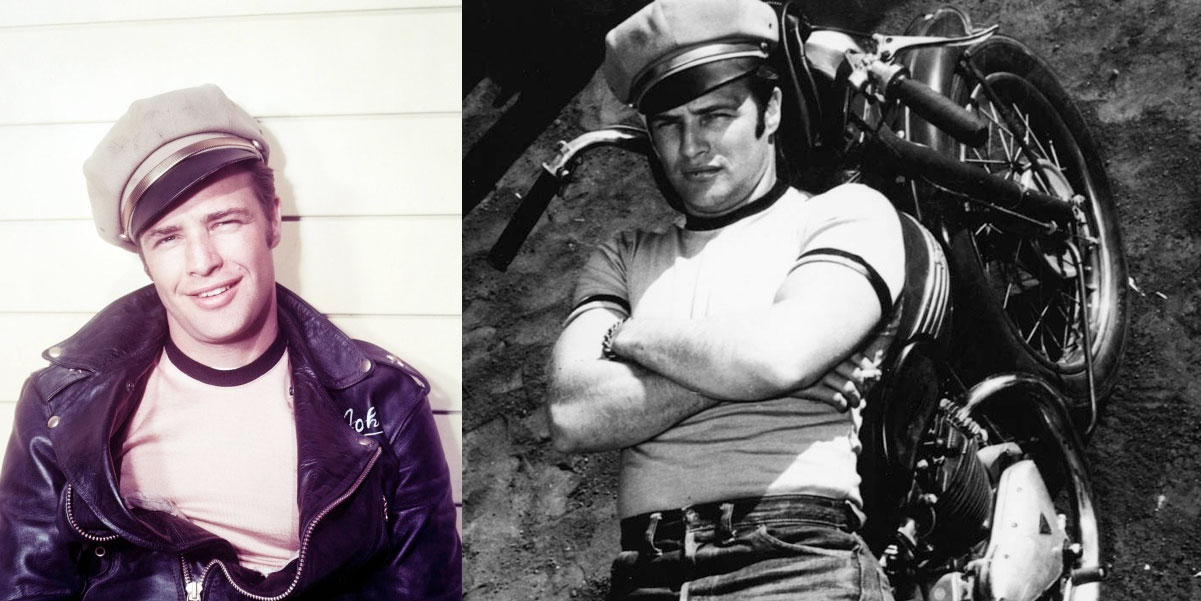 Source//Columbia pictures
A garment we still sell today and although it’s appeal seems to have a 15 yr cycle of’ in fashion ‘and then ‘out of fashion’, it remains quietly in the background ready to re awaken. Laszlo’s film depicts a very different world to Dorothy’s where machismo, rebellion and conflict are central themes to the lives of these motorcycle gang members. Marlon Brando wrote later in his biography that the fight scene with Lee Marvin was intense and verging on ‘real’. Lee Marvin had served as a Marine sniper in the pacific during the war and brought an authenticity to the role as many post war bikers were veterans who could not adjust back to a regular life. His striped long sleeve T shirt communicated a ‘piratical’ menace but it was the ringer from Marlon Brandos cleaner-cut character which was adopted in popular culture. 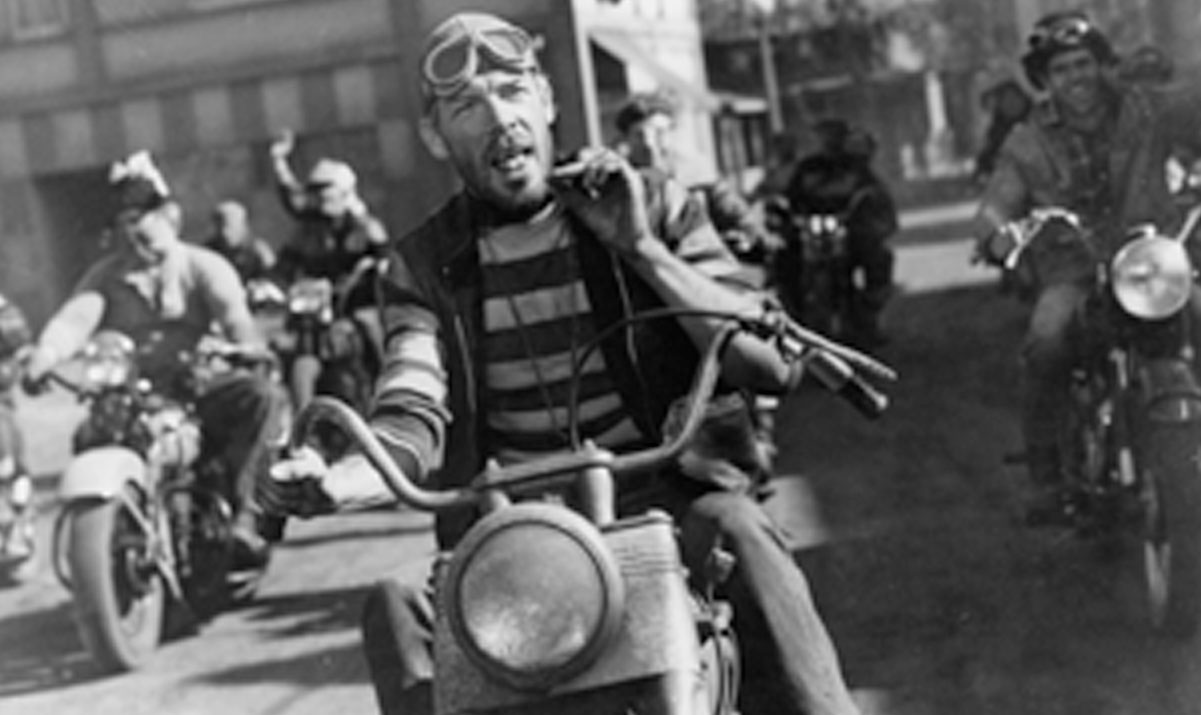 Source // Columbia pictures
By osmosis the ‘ringer’ took on those themes and angry young men had a garment to communicate their cool menace and disregard for post war American old school stoicism. The immortal lines “What are you rebelling against, Johnny?” where Marlon Brandos character answers “Whaddaya got?” had become part of the warp and weft of the ringer.
Cultural anger eventually burns out. The young get old, the ‘new young’ need a new message for their generation. They need a new T shirt, one that communicates their ideals.
The late 60’s and early 70’ brought us ‘faux love’, an antidote to the angry rebellion of the previous decade but a ‘passive aggressive’ form of rebellion none the less. Fuelled by the increased uptake of marijuana and psychedelics as the drugs of choice, instead of the amphetamine and barbiturate culture of violent bike gangs or the Mods and Rockers  in the UK in the early sixties; we saw tie dye and ‘band’ t shirts emerge as the cultural t shirt identity.
Music took over where film left off and the corporate music world realised the revenue power in T shirts. Significant value could be added to a T shirt by adding a print or design that connected with the fan purchaser. The wearers identity become intrinsically linked with their music choice and your ‘tribe’ or ‘gang’ were no longer defined by a lifestyle depicted in movies which few actually experienced but by a consumer preference for music which could easily be experienced. 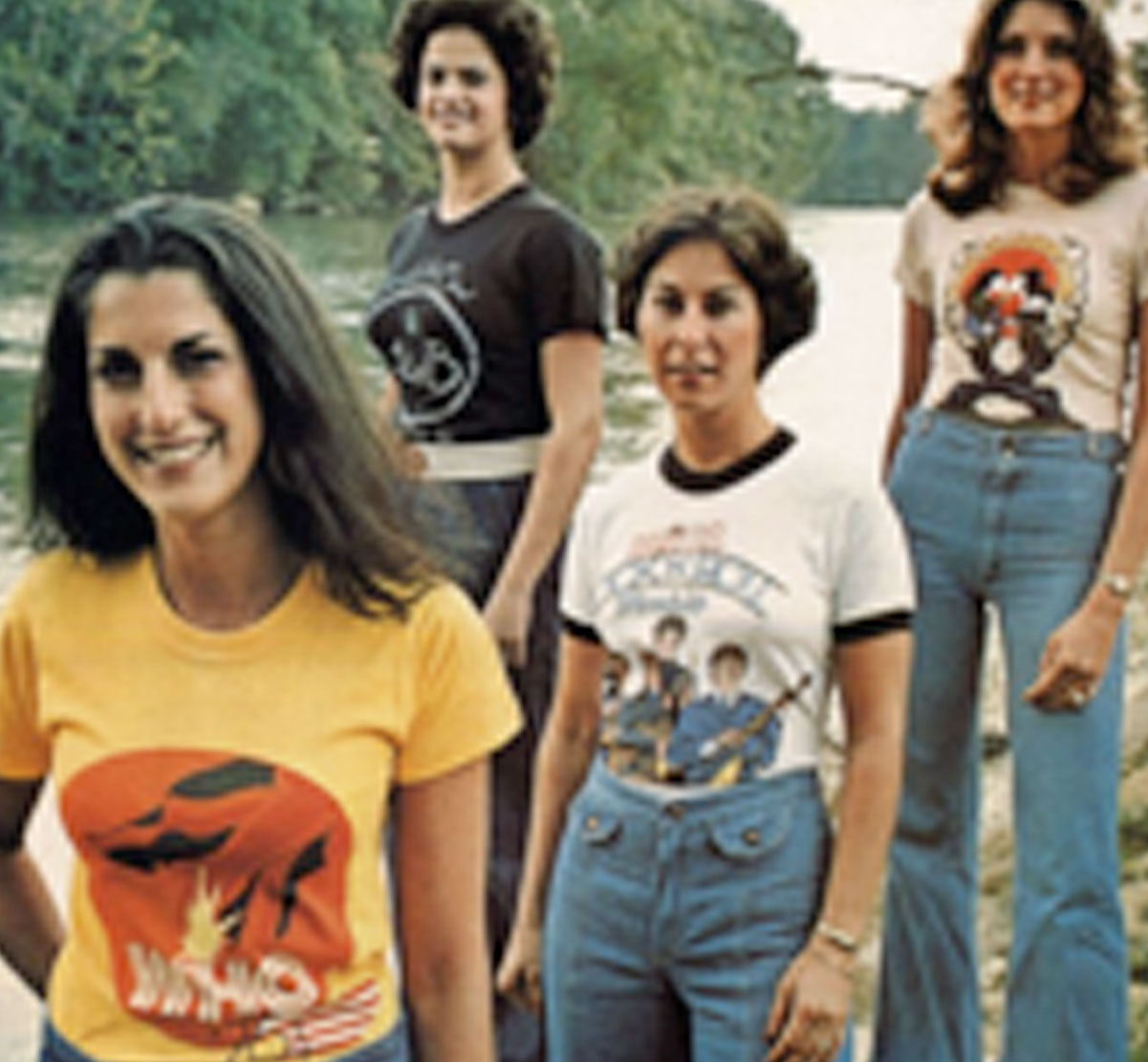 In the late 70’s T shirts were used to push stronger statements of disenfranchisement by the punk movement spawned unwittingly at the time by the vigorously sinewed Iggy Pop. Rebellious disaffected teenagers gravitated towards this angrier antidote to the previous hippy movements in an attempt to create their own identity. T shirts became art and haute couture, they were deconstructed, slashed and crudely printed with political statements and nihilistic cynicism. 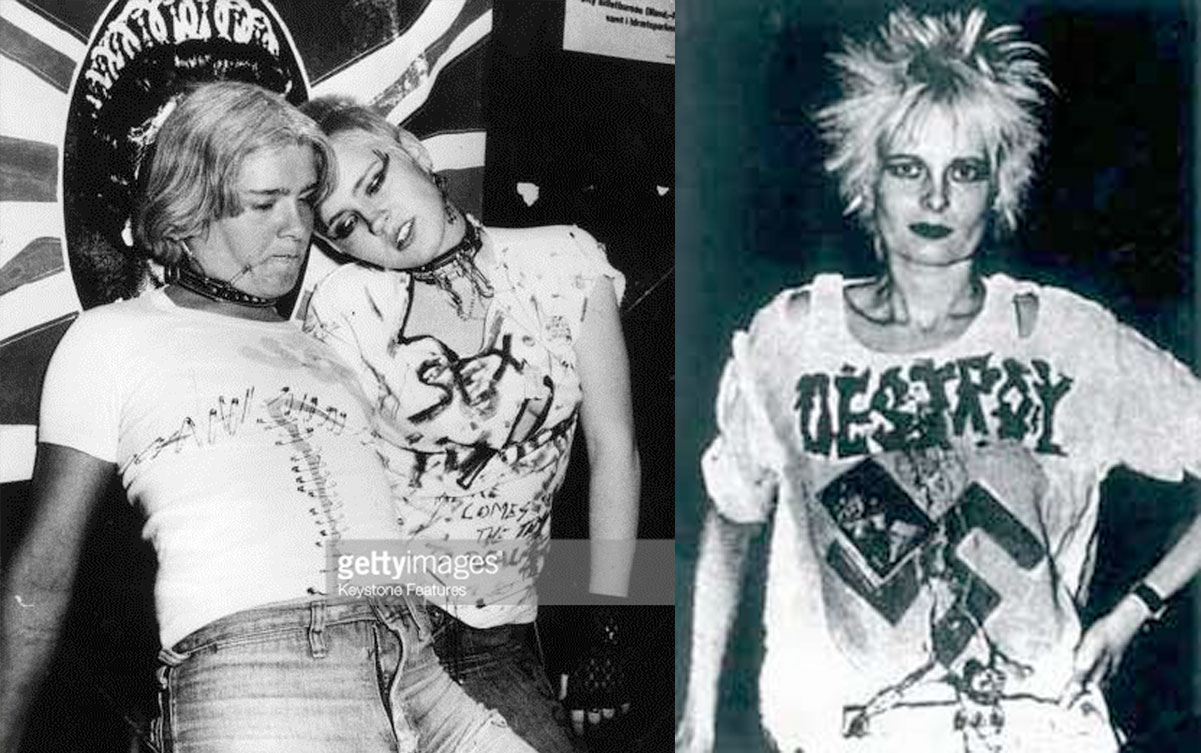 The idea that the punk movement was trying to communicate was subversive, underground and anti-establishment but its flame was so bright and intense that it could only last 2 years in its authentic state before being hijacked by the corporate music machine which ushered in its death at the end of the 1970’s.

Vivienne Westwood when ‘Punk’ was arty and subversive.
The ‘idea’ of Punk still lives on but gone are the arty deconstructs that were the hardcore T shirts of that movement.

As the 70’s mutated in the 80’s it appears that western cultures had ‘grown up’ and the angst, rebellion and dissatisfaction of that post war baby boom generation dissipated along with their youth. Out went nihilistic subversion, in came protest slogans, life affirming slogans, slogans that were BIG in the UK.

These slogan T shirts illustrate the shift into global awareness among the X generation. A perspective that is much broader than previous generations and the new focus for dissatisfaction. As it turns out, this was the last death throw of the T shirt as rebel or political statement.

The mid to late 90’s was a decade remarkable for its economic growth after the recession in the early part of the decade. Suddenly the T shirt was a marketers dream as they saw their budgets swell and no sign that the gravy train was about to stop. Brands were launching products and printing promotional T shirts, film launches were heralded with campaigns using t shirts, charities were promoting  their cause with T shirts. Some brands had been able to develop enough brand equity, belief and loyalty in their audiences and created a type of ‘corporate cool’ with their brands in a way that fashion brands had been able to do in the late eighties and 90’s.

If you were thinking were else the T shirt can go you can thank the ‘naughties’ for its journey into irony and see the  circle close back to film as influencer in this direction.
It seems that we are not angry anymore, we are no longer disaffected or have enough time to ponder and complain about global issues. Or maybe it just isn’t cool anymore. What is cool is the subtle comedy in an idea which only those that are ‘in the know’ will know…..

It has been going for a while now but the end has to be nigh….surely?
Where can the t shirt go next, the idea is interesting if you like to consider that the T shirt can never disappear or fall out of favour it seems.
Mabye the next phase is ‘post irony’ or ‘ironic post irony’? The great minds behind GTA have already seen it coming…… 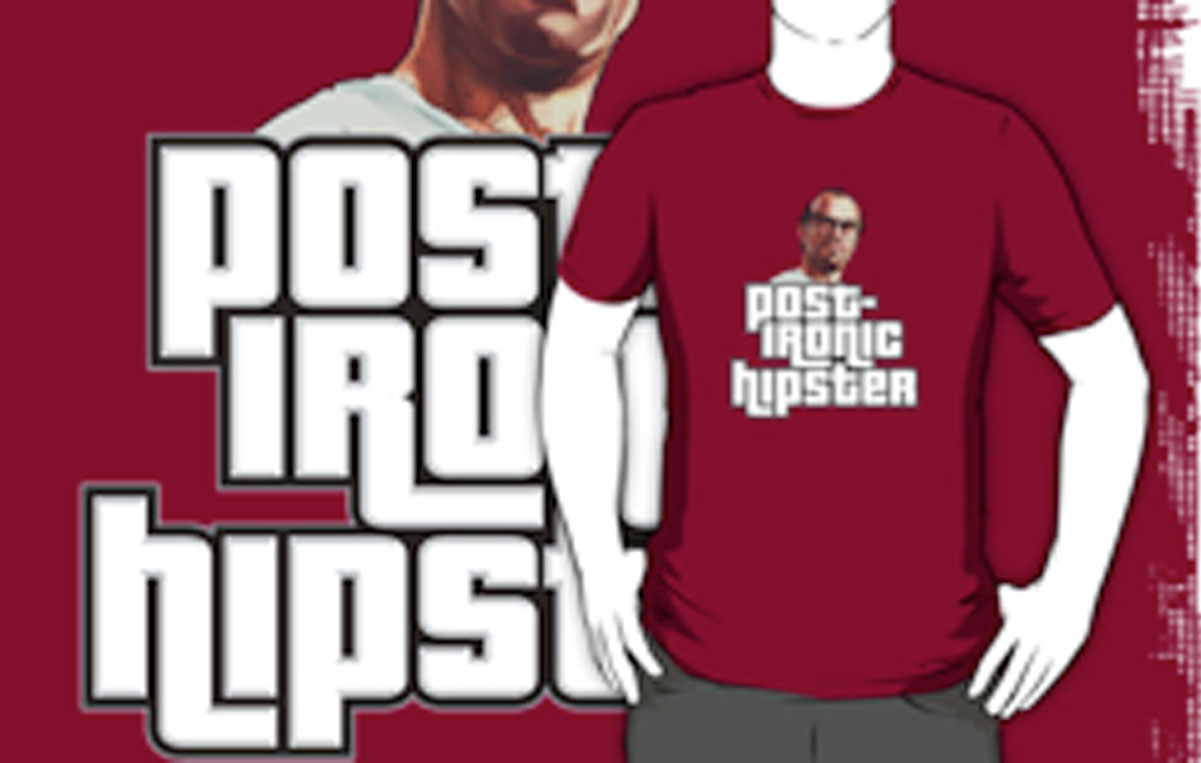 …….but it won’t last. How long is it before your T shirt becomes wearable tech for the masses?
There are already sports apparel manufacturers incorporating sensors into their garments that feed biometric data to your smart phone. 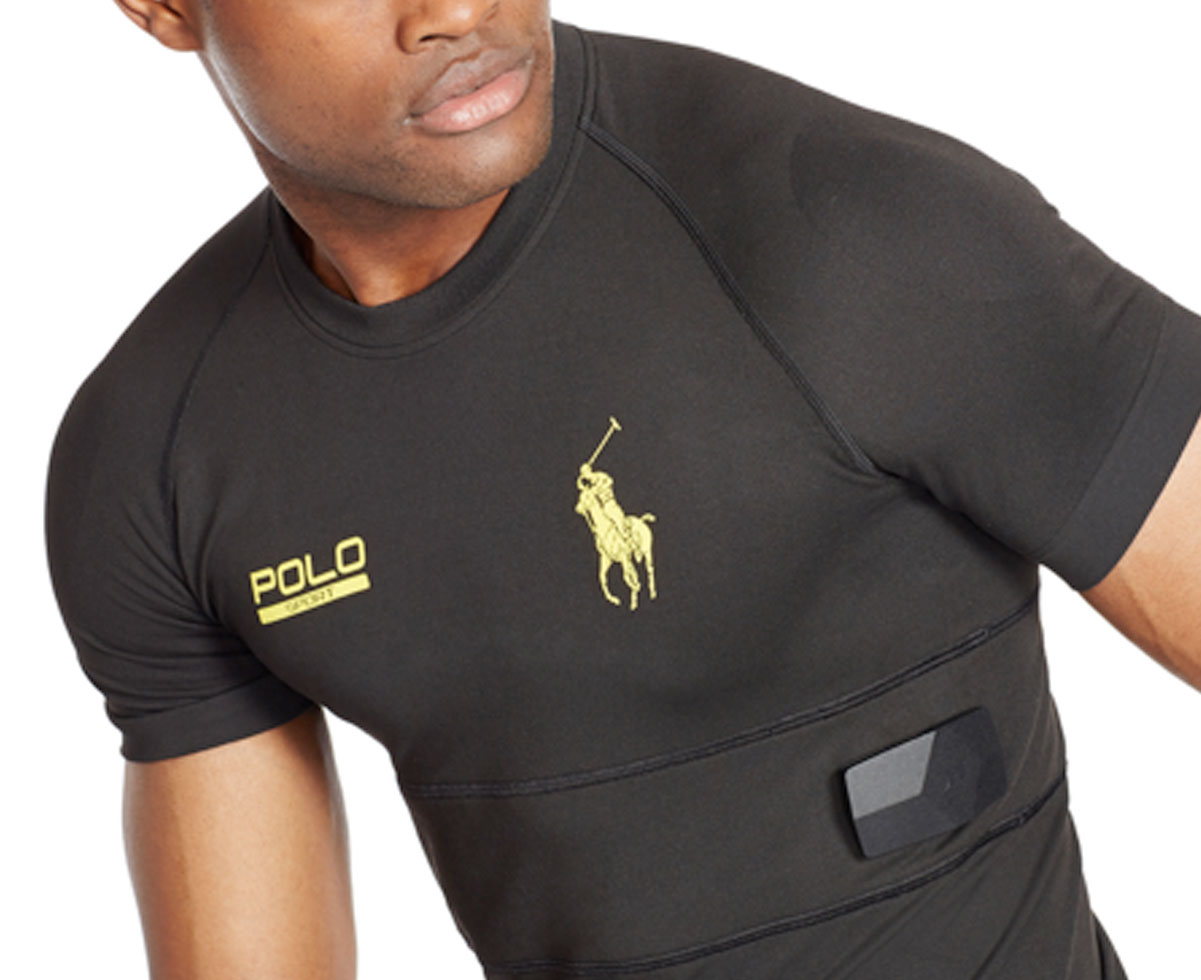 Source // omsignal
This technology is exciting because it offers sports performance and a means to monitor the general health of the wearer. Eventually these data providing garments will be able to flag up early  warnings for slowly building medical conditions as well as help to optimise the performance of the athletic wearer.
These are good things, right?
Well there is the flipside, data is no longer private. Every day we sign over our  privacy rights to our photos, our emails, our saucy text conversations and even our exact location at any one time and the sounds that we experience in our own homes, all through our mobile phones. You can be certain that your biometric data will also being harvested as we embrace this new dawn, and for what?
Well, the answer is that data is useful to anyone who wants to understand you and can afford to purchase that data. Are these people good or bad? Who is regulating this data harvesting and dissemination? How safe is your data going to be? 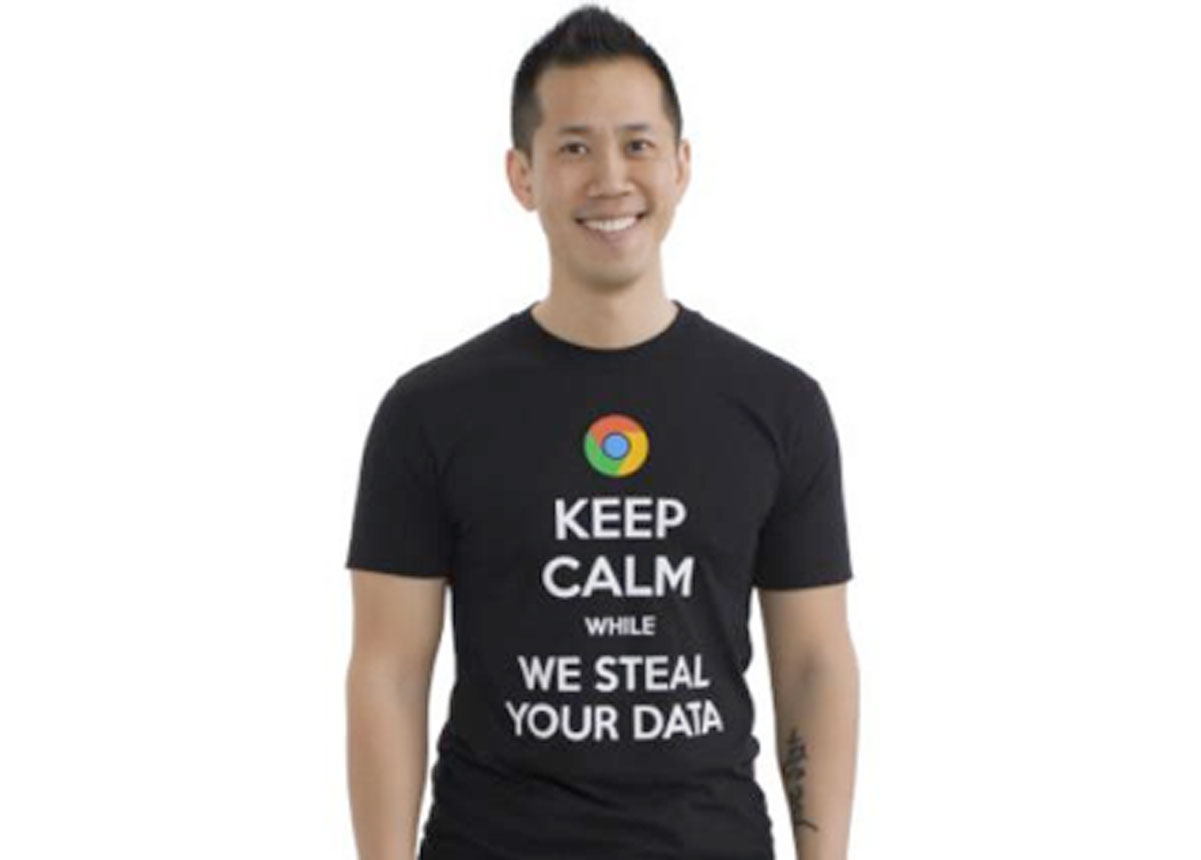 The versatility of the T shirt as fashion item, tribal uniform, utilitarian throw on, protest and promotional vehicle, performance/medical monitor and data thief is only a summary of the evolution of the T shirt up to now. It still has far to go and what goes around will surely come around but it will no longer occupy a simple role in our lives or stand for something so singularly tangible as it once did during those early innocent days.
It refuses to be the suit, it says what you want it to say or it just stays quiet. It will be born and reborn again and again and again. It will be a mirror to the society and the culture that you inhabit and it will be a record of that ‘thing’ you were into at the time you bought it.
If you can believe in the purity of something then believe this…the t shirt will be many things but it started out representing something rebellious. One day is will be the rebel again. 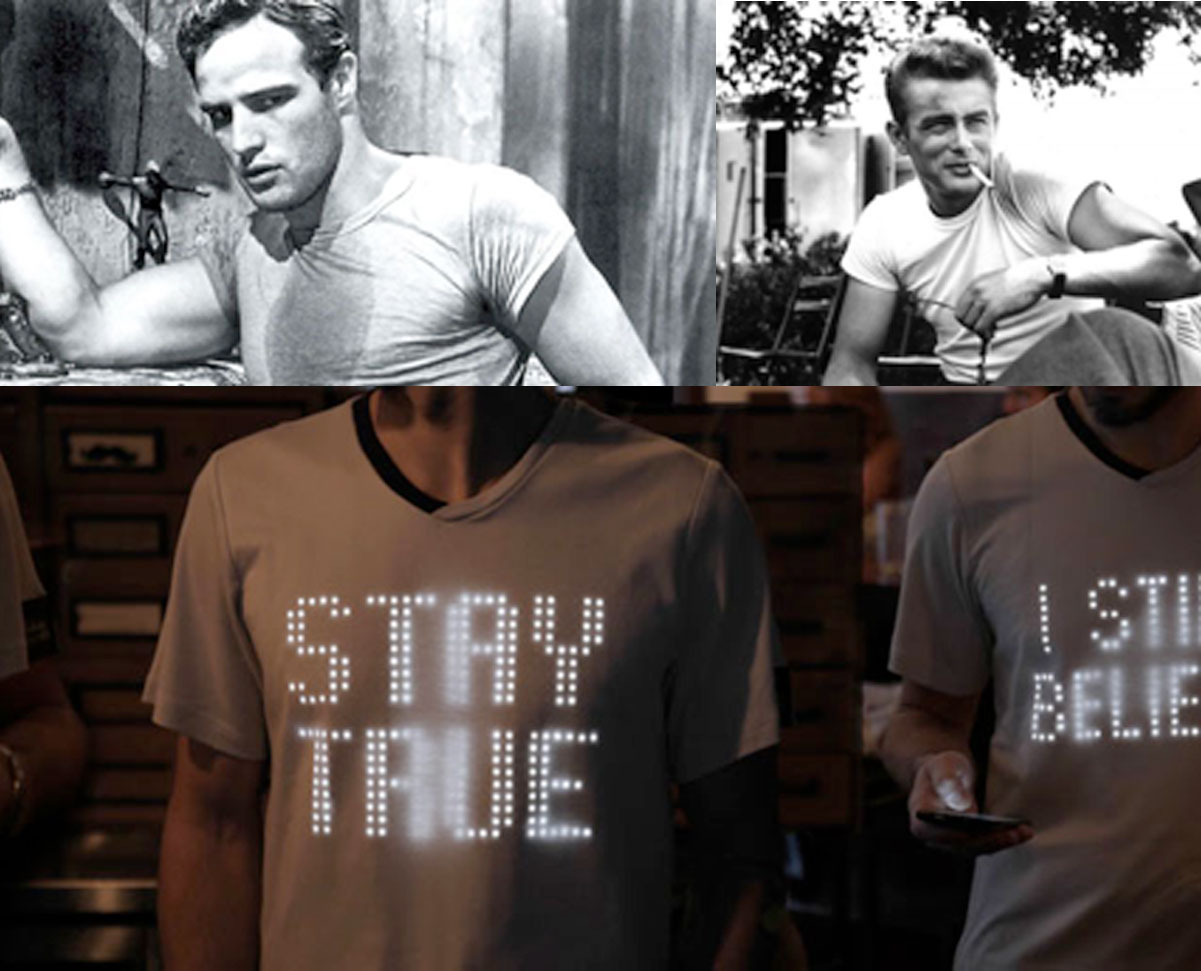