The geographical and economic journey of your T-shirt.

Take a look in your wardrobe or chest of drawers. It is a statistical certainty that you own a T shirt.

What other product do you know of that almost everybody in the world owns?

The story about to unfold is a summary of a typical journey . We cannot possibly tell you all of them as not all journeys are the same but what is the same is the fact that the T shirt is a truly global, cosmopolitan traveller with thousands of miles in its passport and numerous personalities involved in its short life before it finds it home with you.

Your T shirt started life as a seed. If you are reading this in the UK, it is likely to have began its journey in

Much of the cotton produced in the U.S is done so in vast thousand acre farms in places like Mississippi where 3rd generation cotton farmers have automated almost all of the planting, harvesting and ginning processes.

Many of these farms were established when slavery in America provided the muscle to power the industry. 100 yrs of US global dominance in cotton production was powered by these men and women who laboured 15 hrs a day ploughing, sewing, hoeing, picking and ginning. Nowadays technology has removed most of the human element from these endeavours with gargantuan machines automatically and autonomously finding their way between the endless ridges of earth that sustain the cotton stalks. These machines or robots hum and clunk effortlessly, watched by the farmer on small tablet devices.

The farmer is more confident than ever that his yield will be good each year because technology has also enabled him to control the previously uncontrollable. 90% of cotton seed has been genetically modified to improve its survivability. Genes from bacteria are added to make the seed more pest resistant and tolerant of herbicides. This GM evolution has taken 20 yrs to develop and the impact of technology and production automation is staggering. Cotton yields in the US have tripled since the 1950’s.

It is this automation and first world access to technology and rescources which means that the US remains dominant in the growing of this global commodity.The Technology required for large scale cotton farming is sophisticated and expensive and so your T shirt begins its life in a first world economy. However, it cannot evolve into the T shirt you love at the price you want to pay without a little third world or developing economy help. Your T shirt is about to travel to some of the poorest parts of the world to take shape.

Raw cotton is shipped in bales to places like Indonesia or Columbia where the automation capabilities are still impressive and raw cotton is spun into yarn. This five stage process consists of; SORTING, BALE-BREAKING AND BLENDING, CLEANING BY WILLOWING SCOTCHING AND BOWING, CARDING, DRAWING AND ROVING.

When the cotton arrives at a mill the cotton bales are opened and mixed with other bales. This ensures that any colour variations are blended to create a type of uniformity.

Mixed bales often still contain dirt and leaves from the harvesting process and so cleaning is done by willowing and scutching.

Once clean, a lapping machine squeezes the cleaned cotton between rollers to form a flattened sheet called a lap. The lap would come out the front of the machine. It was now ready to put on a carding machine.

Long flat sheets of combed cotton called slivers are produced with the cotton fibres all pointing in the same direction.

The slivers are stretched and rolled into a long rope like cord. Slivers often have to pass through the rollers 3 times to get to the correct thickness. These single strand rope like tubes of cotton are looped around cylinders ready for roving. Roving is the spinning process applied to the tubes of cotton which strengthens the tubes ready for spindling and winding onto bobbins for spinning.

Your t shirt is now shipped to Bangladesh where the yarn is spun into fabric, washed, dyed and packed ready for shipping to the factories where garment production occurs.

4 million people living on £60 a month work in the garment industry in Bangladesh. These workers are mainly women from poor villages who commute into the cities. It is widely accepted that Bangladesh provides the garment industry with its lowest cost option for production. The ethics and economics of this have proved costly in the past. Costly in terms of human lives with inadequately governed factories and unacceptable risks for the workers. Improvements are being made but demand for cheap products from first world countries is the enemy of a progressive policy for improving the lives in garment producing countries.

Your T shirt moves through the hands of these people with great skill and relatively low cost and is then shipped to garment decorators like screen printers and embroiderers or to distribution hubs back to the first world economies.

Approx 20 thousand miles from the USA to Bangladesh and then into Europe.

Cost in raw materials and labour;

Each year over 2 billion t shirts are sold.

China is the largest producer and consumer of cotton but its consumption far exceeds its production. In recent years the combination of lower Chinese production and higher Chinese mill demand led to a record production/consumption gap in 2009/10.

For the 2009/10 crop year, the USDA estimates that China grew 18.0 million fewer bales than its mills consumed.

In 2010/11, the Chinese production/consumption gap reached 17.0 million bales. To help mitigate tightening conditions, the Chinese government auctioned off 4.6 million bales from strategic reserves between the spring and autumn of 2010.

Although the exact figure is unknown, it is thought that there was very little cotton remaining in government stockpiles following the auction. This resulted in Chinese mills becoming dependent on imported cotton to meet orders. China imported 15.0 million bales in 2010/11, 4.1 million more bales than in 2009/10.

The volume of China’s appetite for cotton imports has tightened supplies across the world and this has a volatile effect on the price of cotton and the price you pay at the till.

That price is remarkably low given the journey and human involvement invested in your T shirt.

Is it too low? Should we pay so little when the real cost in resources consumed and lives affected is so evident?

What do you think?

Some of the people that may have been involved in the journey of your T shirt. 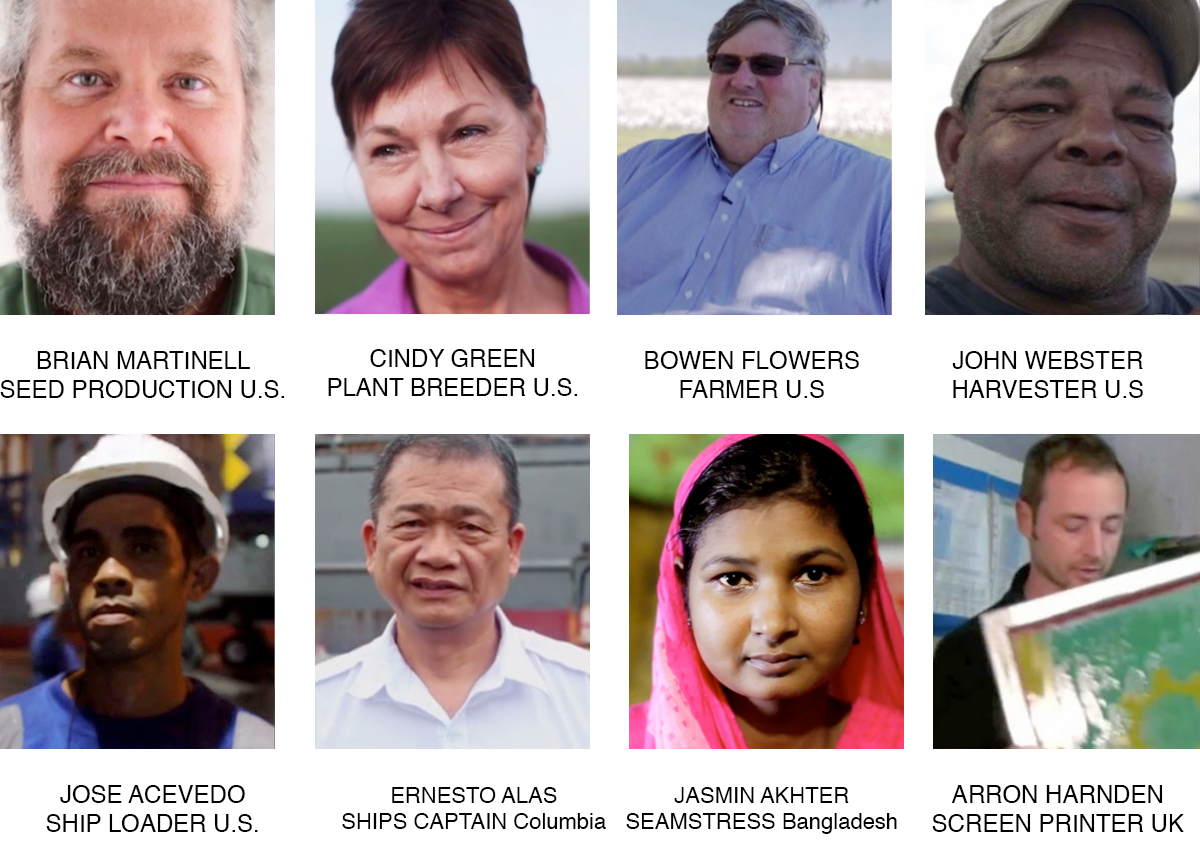