Symbols and logos, the design process and how they can be used on T-shirts.

These days, no one really cares what the difference is, but a symbol is a picture while a logo is a word that is used as a branding device.
When combining the two, you have a ‘combination mark’.
Human beings have been using symbols to communicate ideas and information for over 50 000 years.
In a time when spoken language was evolving and where different groups of hunter gatherers had different sounds for verbal communication, the use of images would cut through misunderstandings and communicate simple ideas more easily than prehistoric grunts and finger pointing.
It has been suggested that early cave paintings in India and Africa are examples of symbolism and art that let others know that there are food and water resources nearby or in a certain direction of travel. A kind of early map or instructional aid memoir.
There are other theories that they are the creative outpourings of early humans, high on prehistoric psychedelics. It is probably a combination of the two.
The very word ‘Symbol’ is an amalgam of two Greek words, ‘thrown’ and ‘together’. This has been translated by academics as ‘something that means something else’.
The idea that something can mean something else is where the power of symbolism lies. Symbols can unite and divide human beings into collectives; religious or ideological.

Our primitive brains still rally behind symbols, we still get excited and obsessive about them and we like to use them to communicate to other people who we are. We send out signals by purchasing clothing and objects that carry these emblems.

This human response means that a simple single colour geometric or amorphic shape can convey a meaning, a set of values and stimulate an emotional response in human beings that modern marketers and brand managers love.

For some, brands have become their tribe, the message they convey is that they align with the ideals of that brand. The symbol is on display, often on T-shirts.

Creating an image for your T shirt brand is no simple task and there is no formula that guarantees success.

If you talk to as designer about creating your logo or design (symbol), they will need a brief.

They will ask you to describe what your brand values are, what feelings you want to convey or evoke, who your audience is, what the history or heritage of your brand is, what the future is for your brand, what your competitors are doing and they will want to see what type of symbols or logos you like and dislike. They will then apply a list of popular design criteria in the designing process.

VISIBILITY Will it stand out in its surroundings, amongst the clutter of competing messages?

APPLICATION How well can it be used across different media, print and web.

SIMPLICITY/UNIVERSALITY Will it be easy to identify and easy to understand in different cultural contexts.

RETENTION Can the design have a mental game of identification within its construct? Something cryptic which once seen helps to cement the image in the viewer’s memory. An ‘aaaah, I see it now’ moment of discovery.

COLOUR It is good practice to design in single colour first, make it work and then add colour considerations.

DESCRIPTIVENESS Does the symbol convey to some extent the message or values of the brand.

TIMELESSNESS A good trade mark or symbol is likely to need to be re-invented or refined every 5 years. This is not always the case if the brand is ‘heritage’ driven but in todays modern, fast moving digital world, re- invention is possibly more important than in the pre digital world.

EQUITY It would be difficult to imagine redesigning Coca Colas logo today. Heritage is one of their marketing messages that build equity into the logo, which represents a comforting, timeless and consistent message. When Apple moved from the multi-coloured logo to the single colour version, many were critical that this was disrespectful to the origins of the brand. In our opinion, they were wrong.

All of this super clever, academic deconstruction of the creative process may produce something that is more likely to succeed than an idea just thrown together, but not always. A good example of a logo that encourages a ‘mind game’.

That revelation or the moment you see what is hidden in a logo is a useful device for the designer. The Presbyterian Churches symbol has 8 hidden ‘messages’ hidden in plain sight and is a fine example of how symbolism can carry meaning that would take a paragraph to convey. A fine example of ‘something meaning something else’. To the casual observer, there are maybe 3 elements. It definitely looks like a religious image. The trained observer, the one who is aligned with the message of this symbol will see 8 messages.. 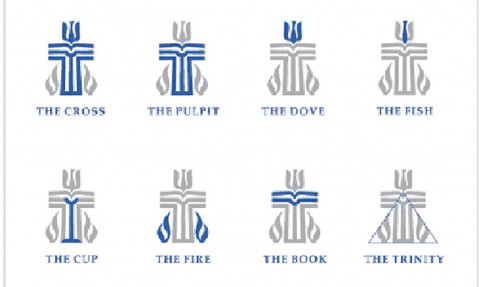 A good example of the results of the creative process.​

Experience Music Project wanted a logo that conveyed the ‘fluidity’ of music. Sound has no shape and is constantly changing, music is interpreted differently in the ears of different individuals. This notion of something that is always moving, channelled the design process into an amorphic concept which is a particularly challenging idea for an image that will exist in 2 dimensions. It is one of the best examples of how an image can communicate an idea in a way that requires a lengthy explanation in words. The image has ‘movement’ and ‘shapelessness’ that synchronises with the idea of music having no solid stable form. The brief required that the design needed to work on a number of mediums including pamphlets, posters and T-shirts.

How to design logos, symbols and icons 2000 It is an example of a logo which crosses over into ‘art’ and exists perfectly within the context of the messages of the brand; ‘creativity’ and ‘expression’. It is the art crossover that is particularly useful if you are designing for T shirts. It is very simple to throw a symbol or a logo onto the left breast or chest of a t shirt and in many cases this is perfectly adequate. Well established brands have been doing this for the last 30 years and have been fleecing us effectively. This is fine, it works if the brand has established itself and has achieved a following that have decided that they align with the values of the business, but it is somewhat lazy. If you consider the space available on a T-shirt and you understand what that is offering you as a designer, you will appreciate the missed opportunity that is begging to be explored. A tee-shirt can exist, not only as a brand or promotional vehicle, it can exist as a canvas. What do T-shirts offer the designer? 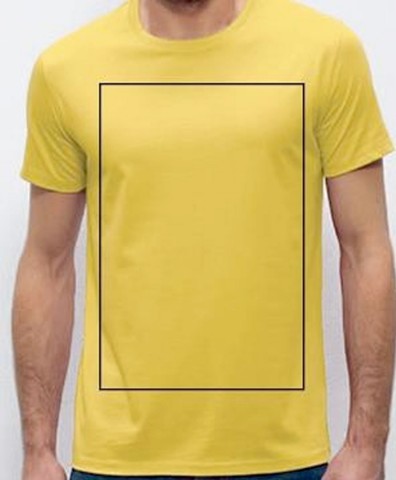 ​Most T shirt printers have a limited print size of A3 or A3+ for screen printing. Digital printing can go much bigger. This is because their print equipment and the vellum or acetate they output their films to can only support this size as a maximum. For 99% of print jobs where a simple, standard front, back or breast print is required. This is fine. It approximately translates as a print area shown on the left, which is 29cm wide by 42 cm high in portrait. It is possible for the printer to move the position of this imaginary box up or down, left or right on the T-shirt to off-set the print area from the standard position.

This means that the designer can think of the ‘space’ in the design process if they are looking to do something a little different.

The example below is a clever use of the positive and negative space and the maximum print space available. This is not a symbol or a logo but it demonstrates an idea.. 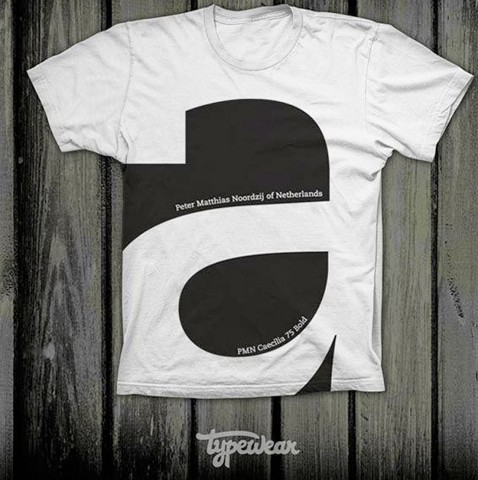 Screen-printers generally do not like printing too close to seams or over seams as the slight ‘rise’ which is created by the fold and stitching can interfere with the way the screen comes into contact with the garment and how the squeegee reacts and pushes the ink through the screen. If you have an accommodating screen-printer, they can often find a way around this problem but is does slow the print job a little as they need to take extra care when printing. So…….consider the creative opportunities available to you as a designer when using customised t shirts to display that symbol or logo you carefully designed for yours or your clients brand. Don’t be boring. Talk to Shirtworks if you need help with your t shirt printing requirements. Author: Arron Harnden