Spatial awareness…wtf has that got to do with t-shirts?

The human body provides a blank canvas for your artistry in a way that is often not considered by your average would-be t-shirt designer.

The variable array of contouring that is on offer by each human body can easily be ignored or you can accept that it is real and you can construct your designs to accommodate, compliment, accentuate or to disguise some of the lumps and bumps that might be embarrassing and you can trick the viewer by the use of clever design to make the wearer of your design somehow seem more attractive to the opposite sex (or same sex, it is the 21st century).

Human sexuality is pretty basic but does vary from culture to culture. The underlying principle is that given the choice, we want to mate with someone who is going to provide us with offspring that have the best chance or survival and success in life.

This means we are looking for certain visual clues as well has picking up on some pheromone clues while conducting our own intelligence tests and annoy-ability tests.

As a t shirt designer, you can somewhat control the visual clues that your designs help to convey and in western cultures most people are looking for the object of their affection to be healthy which is displayed as having low body fat with some strength attributes in the form of lean muscle or some well positioned mass at least.

In other cultures this is not quite the case and in some African countries a health marker would be very different and in some ways the opposite of what we might be looking for in Europe. A healthy looking person in central Africa would be on the cuddly side showing a well fed silhouette which displays wealth and comfort.

So. what does all this mean for you?

It means that if you can, always use a design template that has the garment you are designing for as a base layer rather than just a square art board in portrait.

This will provide you with a more realistic canvas to design for and will stop your brain seeing the boxy square edge of the art-board and stop you being fooled that this is the space you are designing for.

It’s all about spatial awareness baby.

If possible, get a healthy specimen that represents your demographic and get them to wear the t-shirt and photograph them head on and in a number of slightly different poses that you can still use to design on. 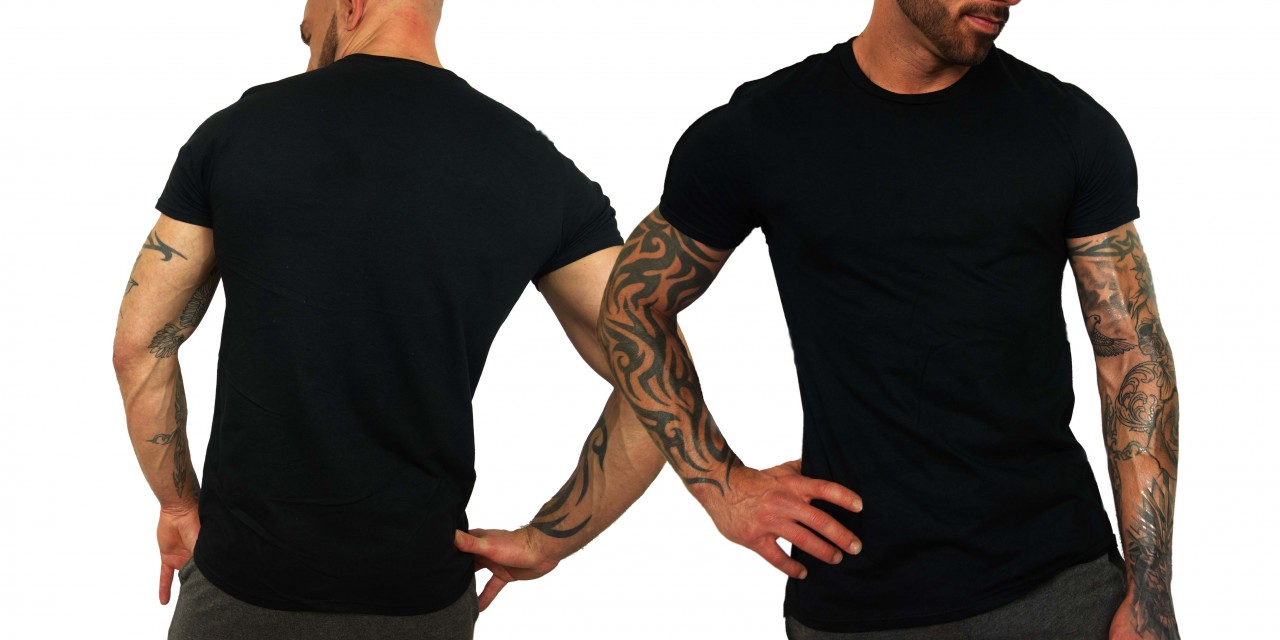 What will become obvious is that the garment takes on the shape of the sex object you have selected as your model and this will influence the way your design takes shape.

Now, if you accept that health clues for a man mean broad shoulders and a narrow waist, you will conjure a picture of a triangle in your head.

If you accept that the health clues for a female consists of a certain amount of breast volume with a narrow waist, you are also looking at a triangle but perhaps with some kinks.

These shapes are not absolute and you can play with the edges and experiment a little but the overriding principle is that a triangle will accentuate both the male and female physique if applied with a little thought and if a large chest or back design is what you are working up.

Two examples above show the full triangle concept on the left and then a chopped triangle with a squarer bottom edge but both designs work with the template well to fill the space available effectively while accentuating the male health clues.

This has been the briefest of introductions to the concept of working to a t shirt template rather than the art-board template and there are always exceptions and rules of your own you can create.

Have a go yourself and hit us up if you have any questions.

More reading if artwork is your thing.