Muay Thai T shirts – an excursion into an obscure genre.

I don’t know what world you guys inhabit at the moment, but my world is Muay Thai.

I love having an obsession, something to focus on and be passionate about and this seasons flavour is from Thailand.

If you know nothing about Muay Thai, have little consideration for honing your physical skills to inflict violence in a stylish and brutal fashion, then let me give you a quick brief.

It can be traced back to the middle of the 16th century in the wars between Burma and Siam as a form of unarmed combat, should the combatant be unlucky enough to lose his weapon on the battlefield.
It’s progression to the ‘sports’ arena of today with its rules and traditions means that it is the only traditional martial art that incorporates the use of all 8 limbs. Other systems have evolved in the modern era which aim to use these weapons but these are more ‘fighting systems’ than ‘martial art’. Krav-Maga being one of them.​

What? I hear you say……so is it fighting for octopuses?

To a practitioner of Muay Thai, there are 8 possible weapons at their disposal.

This unique arsenal has helped coin the phrase that May Thai is ‘the art of eight limbs’.

It is a bit of a misnomer.

Muay Thai is one of those things that becomes an ‘identifier’.

‘Followers’, humans in general, love to communicate who they are to the world, what they identify with……..and they love doing it with T-shirts

These images are often tattooed by Buddhist monks using a bamboo needle into the flesh of a Muay Thai fighter. If they are not done in this way, they will not convey the magical powers to the wearer.

These images are often used in personalised t shirts.

Here are my personal favourites.

Triumph united make T shirts for the general MMA market and they have a certain style. See left picture.

This one uses the twin tiger Sank Yat type image which gives the wearer strength and power.

You will see Hanuman, the monkey god, is also a Muay Thai T shirt favourite. This god is supposed to represent bravery and courage and will give the wearer strength perseverance and devotion. This Headrush T shirt below uses a traditional image and big bold text.​

Muay thai has its own symbols. 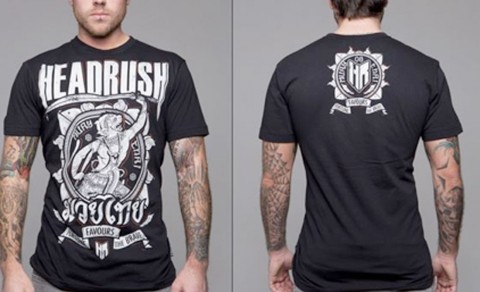 Fear the fighter have some excellent T shirts if you are into that ‘all over’ bright colours, loads going on type look which is popular withMMA fans.

FTF have a t-shirt for almost every martial art. If Jiu Jitsu or Taekwondo is your thing, you will find they have it covered.

Back to basics for this one which does exactly what it says on the tin. This has a very ‘Thailand’ feel with the colour scheme mirroring the Thai Flag

The ‘distress’ is all part of the artwork. Printed in water based inks for a soft feel. Waterbased inks have a number of advantages over plastisol inks. They are softer and they are more environmentally friendly.

Finally, if you are looking for authenticity and you want to look like you are ‘in the know’, you need to be aware of Fairtex.

The name does not necessarily conjure an image of Muay Thai in your mind. I think it sounds like a company who makes duvets, but to the dedicated practitioner, Fairtex to Muay Thai is what Coca Cola is to soft drinks.

If you own a Muay Thai gym and need T –shirts, then rest assured that we know a little bit about your passion and muay thai t shirts

From one Nak Muay Farang to another.