Hail the return of the Greaser

‘Identity’ is an intrinsic human requirement. Without it, many of us are lost, uncertain of ourselves and left searching and unfulfilled.

The vacuum left by this feeling is easily in danger of being filled with a general unease and unhappiness. Often perplexing to the individual experiencing the feeling. They do not know what is missing.

What these individuals do not understand is that they have an evolutionary requirement to participate in ‘collective identity’ to satisfy that primal itch that helped ensure the survival of their species, their nation, their tribe and their hunting party when they were in very real danger of being overrun by a mortal danger or another competitive collective identity; another group attempting to acquire resources.

As individual hominids we are too slow and weak to survive large predatory attack on our own, in those moments most critical to survival (predatorattacks, combatsituations, mortal danger) humans enter the altered state of consciousnesswhere the perception of fear and pain is diminished, we do not question the behaviour of other members of their group, and are ready to sacrifice their lives for evolution’s more important super-ordinate goals (i.e. survival of the children or the group).

Modern 20th and 21st century society has largely removed the danger from our lives that our ancestors experienced for tens of thousands of evolutionary years but the hangover remains and it is part of our DNA.

We often search for this identity in subcultural movements that seem to resonate with our internal ‘rhythms’. We ‘collect’ around religion, politics, sports activities, music, shared aesthetic appreciations, fashion which can all become lifestyles.

These ‘lifestyles’ need a name and a look before they can become subcultures. They can only become a tribe of collective identity when the participants all agree what that is.

That agreed identity will only attract others if it becomes attractive to the media and is communicated more widely.

There is no better example of the growth of a subculture than the story of Kustom Kulture.

This American neologism, born in Southern California in the early 1960’s represented a human ‘collective’ which had adopted a collection of ideal aesthetics around a central theme of their customised hot-rod cars and motorcycles. Hairstyles, artwork and fashion quickly evolved and became synonymous with the movement.

Participants in this culture became known as ‘Greasers’, attributed to the way they combed their hair back and used pomade, creams and tonics to fix it in place.

Primarily a poor or middle class white youth movement, members of this group became known as hoodlums or ‘hoods,’ in American parlance. This was mainly due to the higher crime rates that existed within these communities but it was the Greaser that became the ‘badboy’ and the ‘outlaw’ that often has a natural magnetic pull. The American media of the mid-sixties fell for it, reflected it in movies featuring Marlon Brando, James Dean and Lee Marvin. These movies spawned international imitators who were able to infuse their own cultural flavours.

The movement also spawned the first subculture connected printed T shirts with Ed-Big daddy-Roth airbrushing his Ratfink characters onto T-shirts. This antidote to Mickey mouse was adopted by the younger Greasers as the symbol of their rebellion, a disconnect from the clean cut. The demand for these T-shirts required a mechanised process for screen-printing and it was this that created the idea for the modern T shirt printing press or carousel.​ 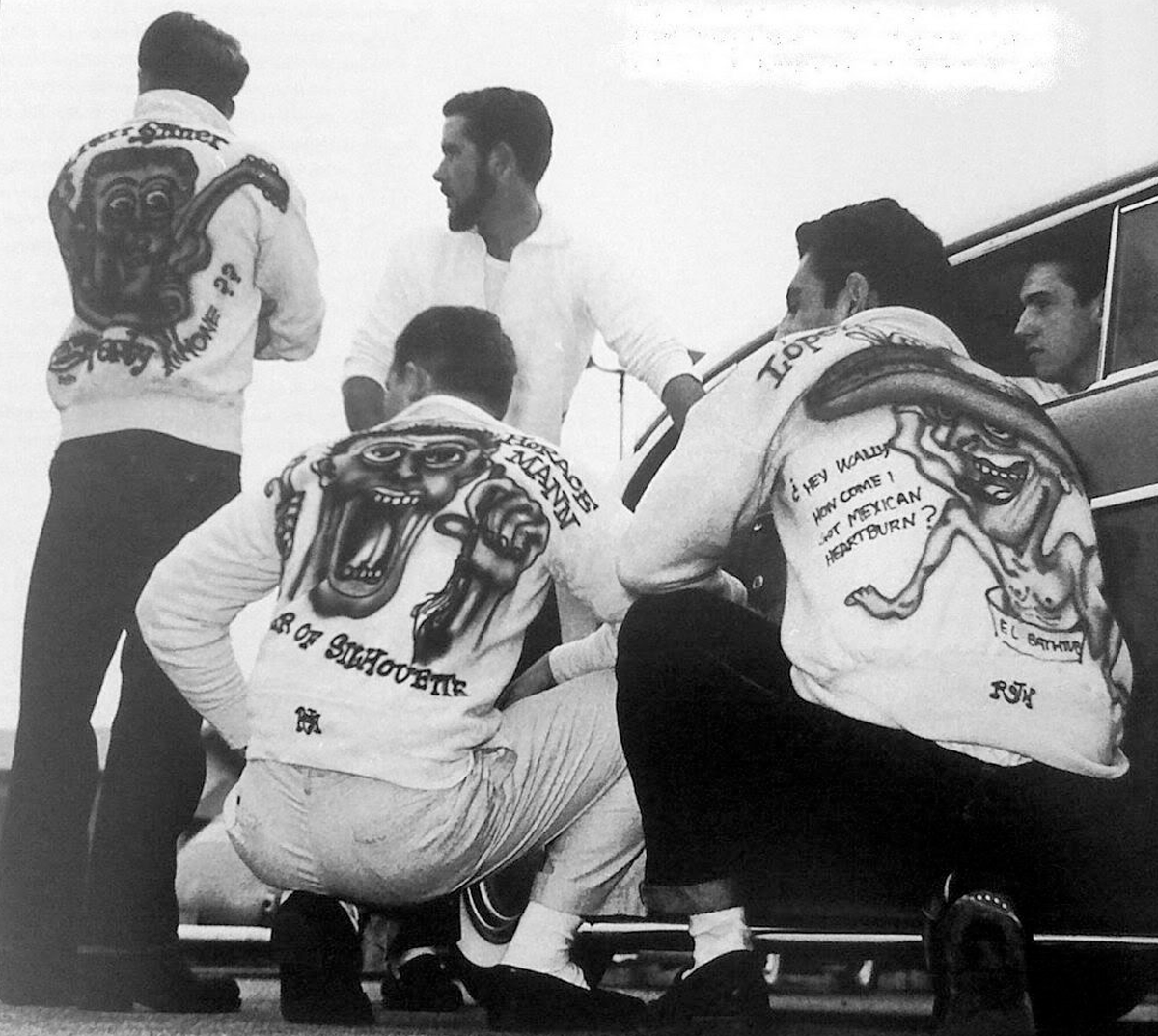 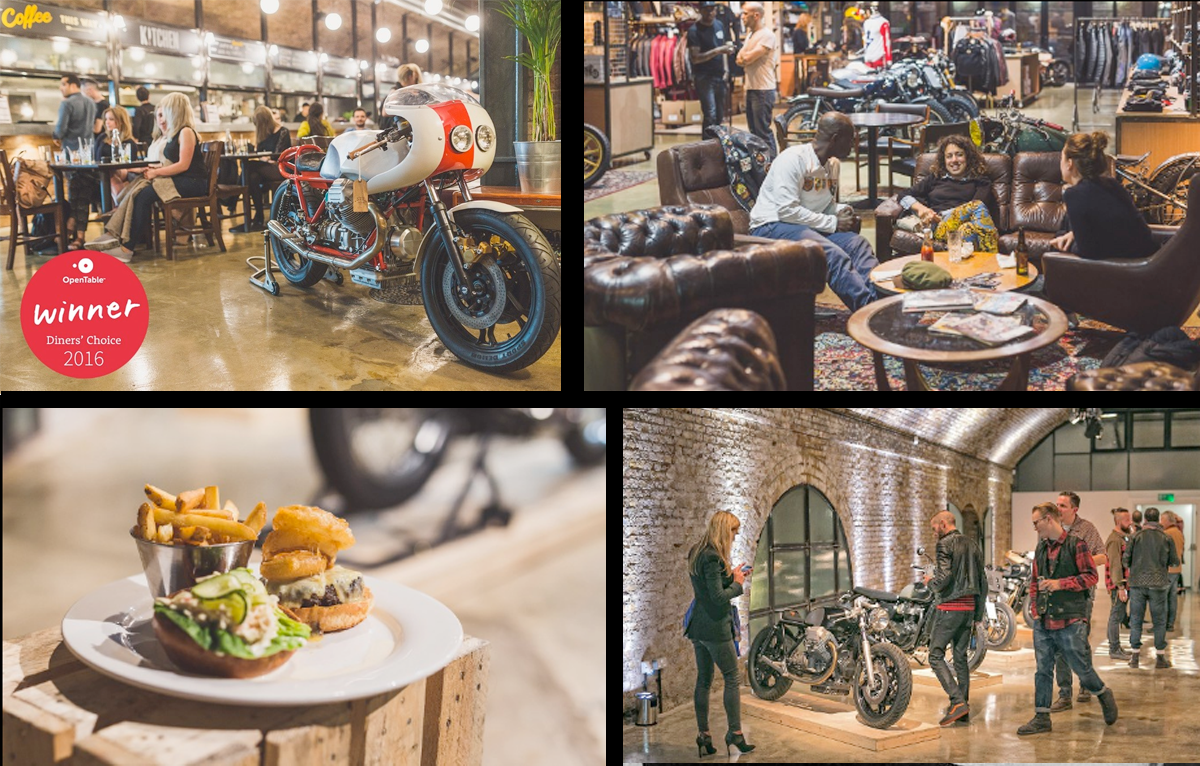 In Britain, the Greaser subculture was adopted and subverted. Renaming themselves as ‘Rockers’, they rode around on lightweight Triumphs and Café racers instead of the heavy ‘muscle bikes’ of Harley Davidson America.

The sub context within these groups was often violence. Fuelled on amphetamines, testosterone and collective identity neural synchronisation, the Rockers often engaged in gang violence with their antithesis adversary, the Mods. This rivalry exposes what the real core identity is for the group truly is. They were members of their own warrior culture, exercising their subconscious urge to defend and acquire.

Violence was attractive to the young male mind. It is a currency and it is glamorous and attractive if inflicted expertly. It is primal, it attracts sexual mates and it ensures the groups survival .These ideas exist in the most primitive part of the brain, the hippocampus. Your DNA has put them there. Your DNA compels you to belong to a group.

From a location in fashionable Shoreditch’s Old Street there is a new more civilized genesis for the Greaser or the Rocker. It is a beautiful adaptation and evolution. It is a polished re-birth. It is the 21st century’s version of an idea that has endured for 60 years.

The Bike Shed is the centre of the rebirth.

The central pull is customised motorbikes but there is a wider appeal and it stretches into an aesthetic which will have its own pull.

The aesthetic is developing into a brand and it is perfectly positioned to succeed. It has all the ingredients of heritage, lifestyle and willing audience/community.

Any casual observer can browse the forum on the Bike Shed website and see the ‘love’ exchanged by way of advice and feedback over the central theme of motorcycles.

It is the right idea at the right time. It represents custom motorcycles as a polished re-invention. A new movement to connect with, engage with, eat the food from the Shoreditch restaurant and wear the clothes. It has the potential to go international as a brand.

Shirtworks has been working with the Bikeshed for over 2 years now. As the main supplier for printed T shirts and sweatshirts. What is evident from working together is how the psychology of those involved in engineering customising motorcycles affects how they buy printed and embroidered clothing.

There is a ‘precision’ in the mind of an engineer which seems to need to be translated through all aspects of their lives.

The Bike Shed use only the best materials and construction in their garments.

Earth Positive is the brand of choice.

Screen-printed in plastisol and water based inks, these garments are a perfect balance between style and quality.

The ‘fit’ is more considered and fashionable. The weave is flatter and smoother and the average T-shirt.

The screen-prints are often distressed to fit with the vintage/retro heritage and the oily biker.

The Bike Shed adds additional branding to the garments with hem tags and inside neck labels screen-printed directly into the inside nape of the neck area.

These garments can be purchased from their online store and it doesn’t stop there. If you want to become a post- modern Greaser yourself, a 21st century rocker, you can purchase your ride from the classified ads section of their website.

There is a bike for everyone, a bike to fit whatever budget.

So………maybe it’s time for you to connect with the ‘outlaw’ again. Maybe what is missing from your life is that hot metal between your legs, the connection to a heritage that is ‘renegade’.

Get some dopamine, get a motorbike, get connected to a collective identity and get to Old Street in Shoreditch.

The BIKSHED are looking for new recruits.