Getting anorak about sweatshirts. 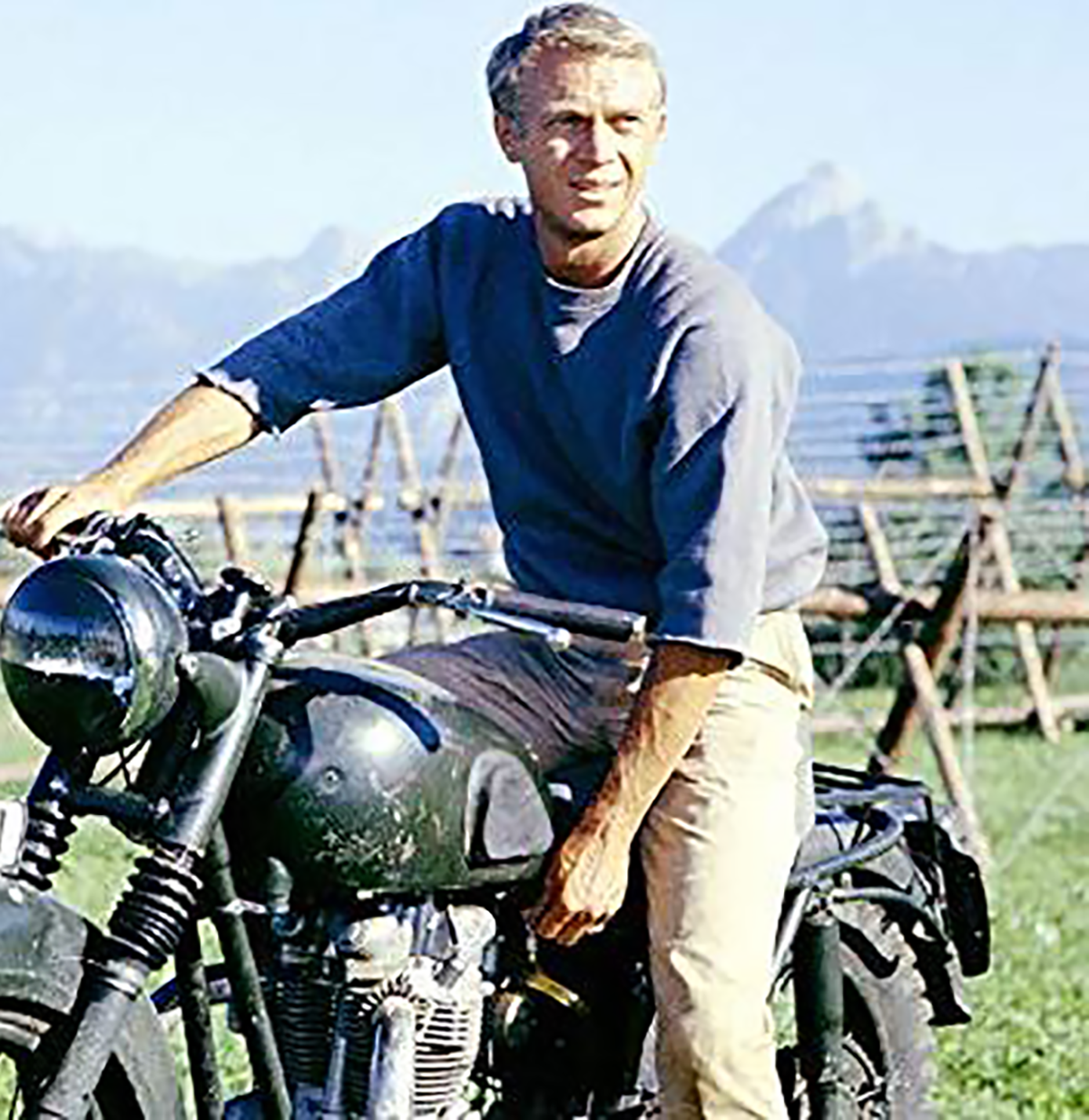 Trying to figure out what sort of man/boy I wanted to be so I could get the chicks at my local primary school.

Most of my contemporaries were cutting about in in their older brothers cast offs at the weekend or were badly dressed in what their mum thought was cool at the time. Namely a pair of flared jeans and a rolling stones t-shirt that was big in 1979.

The 70’s were a decade where men started to look like women,all hair and with a stage shimmy and feminine sex appeal that weirdly seemed to attract other women. Even the nihilist punks had an angry femininity.

The search for my ‘look’ came to an end when I dropped my Chopper to the ground on a sunday afternoon, ran in doors to grab a drink and saw what Steve Macqueen was wearing on my telly in the 1963 film ‘The Great Escape’…..I wanted what my new instant man/boy crush was wearing….I wanted a faded blue sweatshirt with the lower arms hacked off.

Yeah…….good luck getting that in 1979 Southampton.

By then, it was already 47 years old. Having been developed in 1932 for American football players to sweat in, as an alternative to the itchy woolen sports fabrics of the day.

The Trojans, Southern Califonias football team, needed something to wear under their pads to stop the chaffing and, unknown to them at the time, a little changing icon of fashion and dare I say it ‘style’ was born.

It has never really gone out of style.

It’s shape might change very slightly, the finer details of neck thickness, cuff length, colour and texture blends might move in and out of favour but the basic principle is the same.

If you really are an aficionado of the sweatshirt or if you are in the industry you will be aware of these subtle variables.

If you really, really, really are an aficionado you will also be aware that there is one important question that must be asked…………….Raglan or dropsleeve?

Your answer, however irrelevant or innocuous to some, (Luddites I say)….will determine what tribe you belong to and can even determine your demographic in some way.

The drop shoulder tribe ( also known as ‘set in sleeve’).

The trick to wearing the drop shoulder correctly is all about hitting the sweet spot with that seam OR missing it so deliberately by an absolute mile so that you are going for total sex appeal enhancement, totally off the shoulder look.If you get it wrong;…………..it……….looks…………wrong…….!

Unfortunately, Steve did not have the luxury of a Raglan sleeve in 1963 and his motorbike escapades were conducted in a massively drop shoulder style.

If fitted correctly with the seam dropping directly down from that knobbly little bone at the end of your collarbone. More can be read here if you wanna geek out. This style can look very crisp and fitted. Your ‘upscale’ yachtsman or architect might sport this look.

These guys like the smoother rounder silhouette and the shoulder enhancing effect that the raglan naturally offers.It really does make your shoulders look bigger and in the race to secure a mate in the 21st century this is a Tinder must have…..or Grinder as it happens.

The raglan sweat is most often found on the more ‘yoofull’ individual or fading ‘yoof’ who weirdly is either totally into being fit and having strong shoulders or who is a total slacker hanging around the skate park trying to score….if you know what I mean.

The raglans versatility can fit with either of these sub demographics and fashion brands tend to prefer this style as it has a certain je nes sais quoi that appeals to the yoofs.

We think this is because it looks less formal.

A quick canvas around our office seems to show that we mostly occupy this tribe and that is because we are all fading yoofs.

If you want to click through all the raglan options then be our guest. There are lots of styles to choose from for your personalised jumper and you will definitely see the ‘fashion’ element is well represented.

If the idea of the sharper silhouette is more your bag then all the drop shoulders are grouped for your ease and pleasure.

We would recommend that you go organic wherever you can and Stanley Stella have all the accreditation you could need and some really excellent styles.

This is our favorite raglan

This is our favorite drop shoulder

This almost gets you the Steve Mcqueen look.… and… this

This is our favorite sexy off the shoulder as voted by the office females.

Finally, this is all the sweats starting with main categories which you can filter down to specific products as you click through.

As always, if you need any guidance…..hit us up!!