There has always been something to moan and protest about.

Moaning is as old as the hills.

I quite often moan and protest about emptying the dishwasher or the bullshit weather in the UK.

Some moans are legitimate, a collective rally against injustice and a desire for positive change.

Some moans are indulgent virtue signalling that originate from a closeted perspective, or they are just ‘hate venting’ spawned from fear or misdirected pent up rage.

There is plenty on offer at the moment. It seems like the world is in a bit of a geopolitical, social and financial mess…..but I have a theory…….It has always been in a mess……..and in reality, we have never had it better.

Never the less, some moaning is necessary, absolutely necessary to maintain balance and equity in a naturally inequitable environment of competing human interests across borders and politics.

Now, more than ever, there is a ready platform for the discontent to collect and organise.

The internet is that platform and has mostly become a mechanism for pornography, shopping and for moaning.

It is also a YouTube window for 360 million people of the world who earn less than £2 a day to see how we in the west live so lavishly with big TV’s, plenty of food and running water and yet we still have a notion that we should moan and protest.

This, I am sure, is fuelling a general discontent and sometimes violent unrest in developing and third world countries as they see how things could be if only their inept rulers/corrupt politicians stopped pocketing the cash for themselves and tried to do some good for their own people.

We are in interesting times.

Given that there are so many topics to protest about these days, we predict that 2017 is the year of the protest T shirt.

If you Google ‘protest T shirts 2017’ you will see that feminism is the hot agenda at the moment. This surely is a knee jerk reaction to the instalment of pussy grabbing Trump as the most powerful man in the wold.

Whether you think grabbing pussy is sexism manifested or just a bloke grabbing what he wants, like counties grab other countries and then murder whole swathes of the civilian population with drones and air strikes, you will agree that the world would be a terrible place without free and happy women. Happy women = Happy mankind = We all need to be feminists.

Trump is the next protest T shirt worthy of note for 2017.

He is an easy target really. It’s easy to hate on Trump. His lack of a ‘filter’, his direct business-like approach to problem solving rather than the political tight rope walking of career politicians who are trying to please everyone, will likely create winners and losers with increased polarity.

We can hate him if we like, but he will go down as the first president in US history that was elected fairly on a mandate that he actually carried out. Isn’t that the way it is supposed to be? Just a question…..

Article 50 is about to be enacted. It could be a disaster if you are a Brexit remainer, or it could be like unshackling yourself from a bad marriage so that you can run wild and free in a global party full of suitors who want to check you out. No one really knows, so it seems like you can either be frightened and cautions or bold and reckless.

With all this protesting, surely there has to be a protest about the amount of protesting.

With all this protesting, surely there will come a time when we all get ‘protesting fatigue’.

Will all the noise of all the protests eventually create a ‘zone out’ where we ‘detune’ back to our quiet lives?

To be honest, who is really listening to the protests unless they get kinetic and dangerous?­ 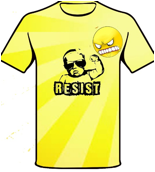 Things are not always fair, they rarely can be.

It is the way of the universe, there are winners and here are losers and the sun will eventually swallow the earth and mankind will be the loser.

But there is hope, the resistance is gathering strength and you can already buy the t shirt.

Or maybe resistance is futile, maybe you should abandon hope and watch some telly?